We left Teven and headed south again, not 100% sure where we were going. We had found a farm stay not far out of Kempsey when searching through Wikicamps. Rach gave them a call indicating that we were keen to stay, probably for 5 nights.

Their response was quite cagey and guarded, only wanting to commit to having us to 2 nights and then “see how things go…”. Hmm.. ok. My spidey senses started to go off a little and was a bit uneasy about the whole thing, but we decided to give it a crack.

At around lunch time we pulled into the driveway and there was no life to be seen. A quick call later and we were told to just set up wherever we wanted. We drove around the back of the house into a nice paddock space with a beautiful view, that had a gentle slope over the whole area. We played around with a few spots and setups, but the hill was just being a real pain. The whole “2 nights” thing kept on ringing in the back of my head. Was it worth getting everything sorted for 2 nights, only to need to then move on? 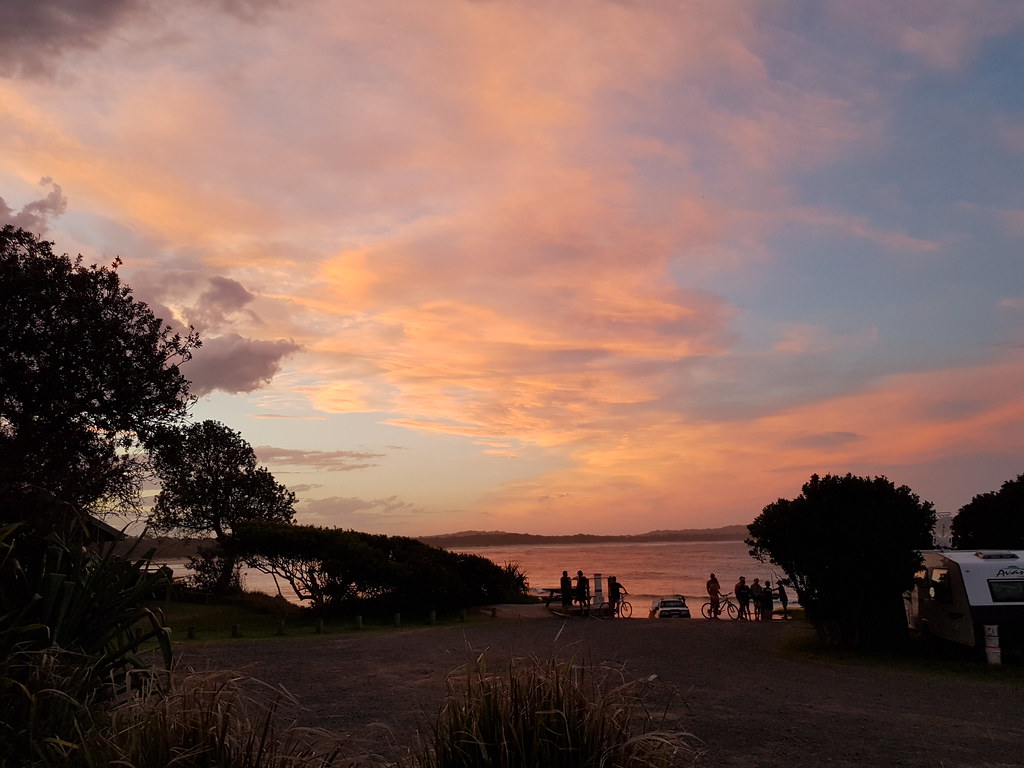 45 minutes and a couple of small tanties later, we made the call that it just wan’t worth it and would move on. Rach sent them a nice message to say that their place was very nice but just wasn’t going to be for us – only to receive an abusive reply. Oh well, I guess we made the right decision! 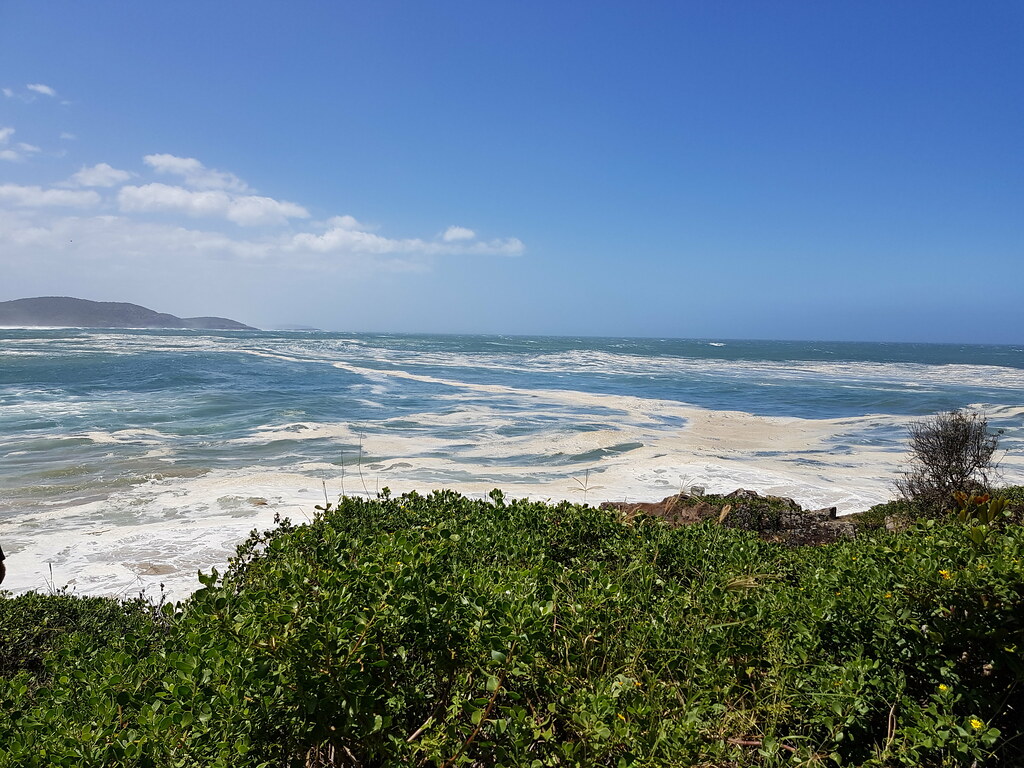 So where to next? First option was Hungry Gate, where we had previously stayed, but it was pretty full, so from there we decided to move on to Point Plomer – just south of Crescent Head. As soon as we arrived, our decision was confirmed. There was a “skid or die” competition happening and we couldn’t get the bike off the back of the camper fast enough for him! Thankfully he remained upright and didn’t come off this time (which couldn’t be said for all the adults participating) and also managed to take out the “trick skid competition” with a trademark stand on the top tube and get it really sideways skid. 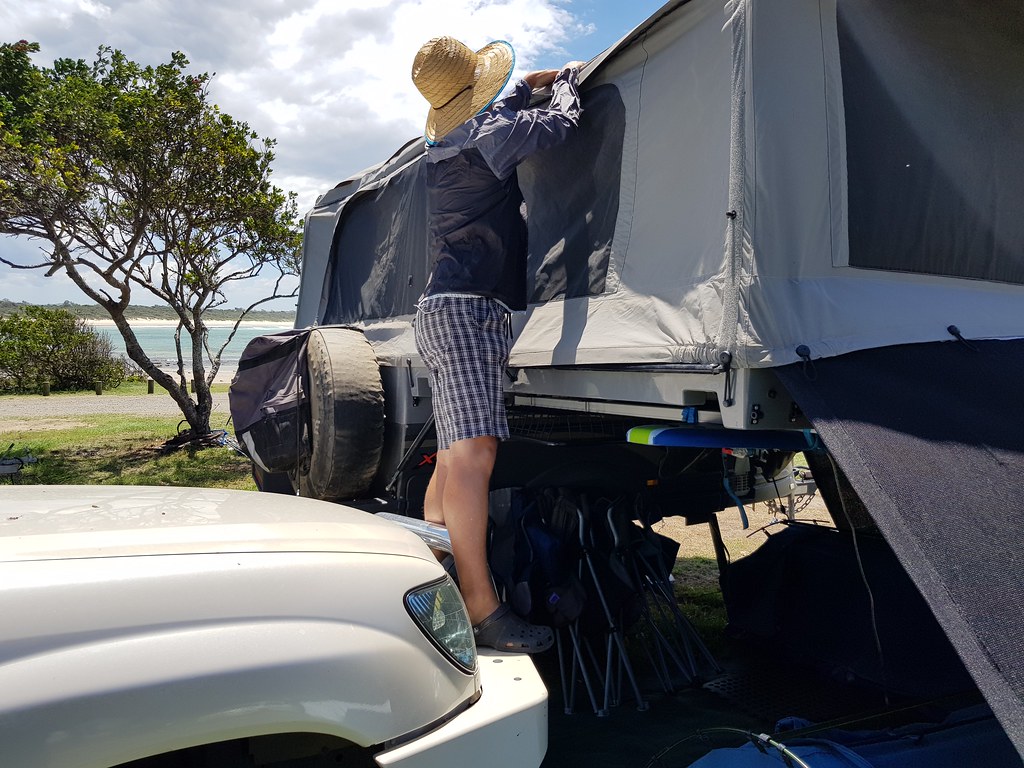 Had to tighten down the tropical roof in the wind 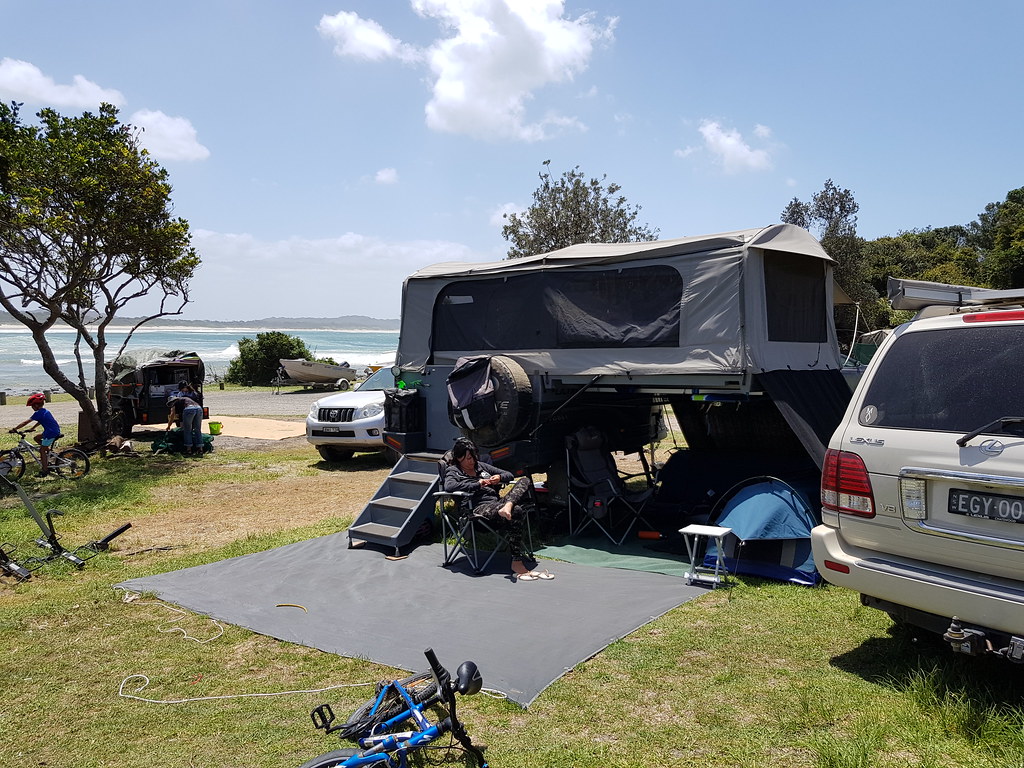 We had reasonable protection from the southerly (this is facing north)

The next morning was beautiful, until about 10 when the wind started. And boy… did it blow! I reckon the wind didn’t drop below about 30km/h for the next 3 days straight. This made for a less than ideal time here, even though it was such a beautiful spot. We still had a great time – it just wasn’t as great as it could have been. It would have been a perfect opportunity for Lucas to do some more surfing, however with a massive surf and hazardous surf warnings, it wasn’t a great idea! 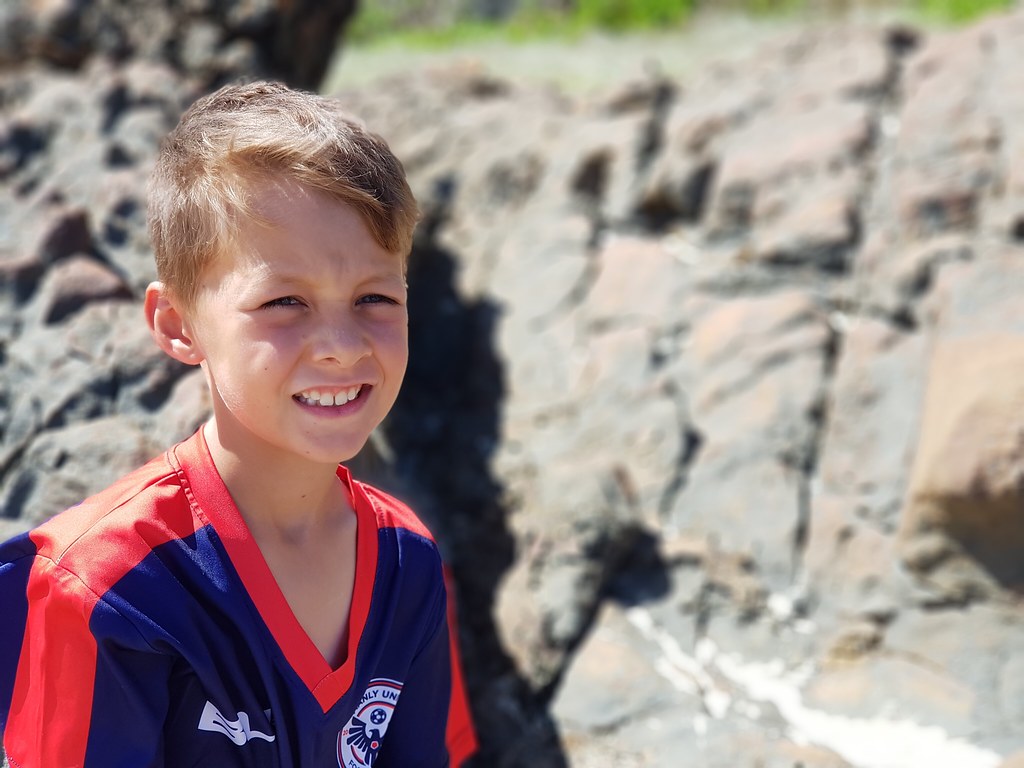 Hanging with my boy 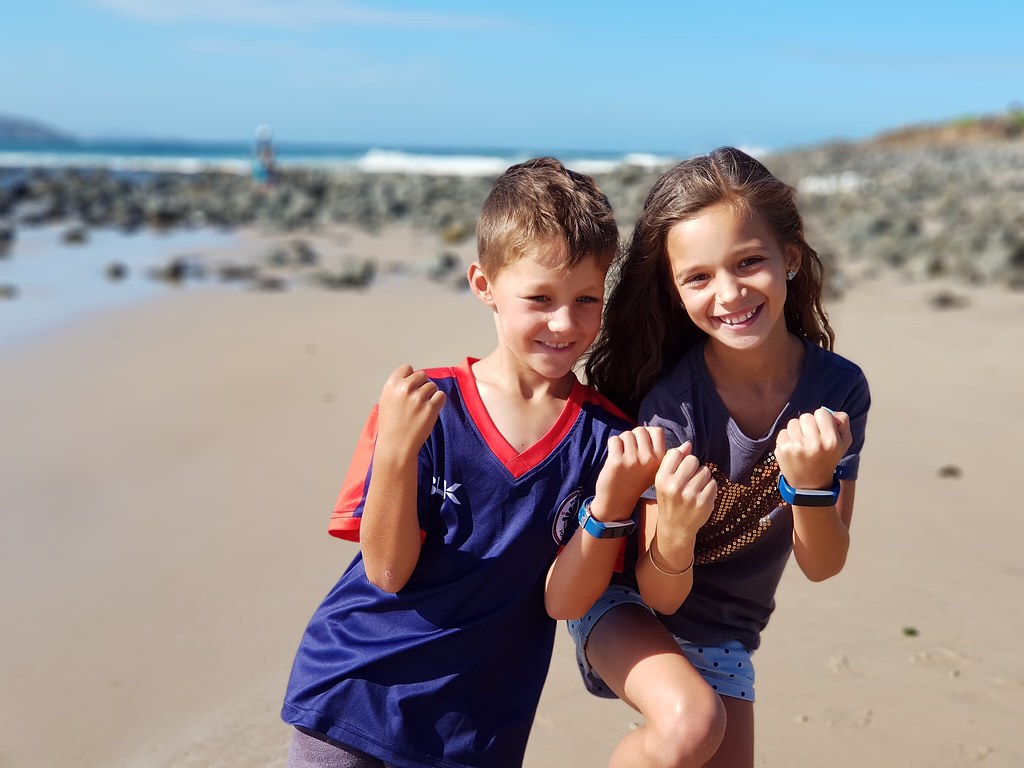 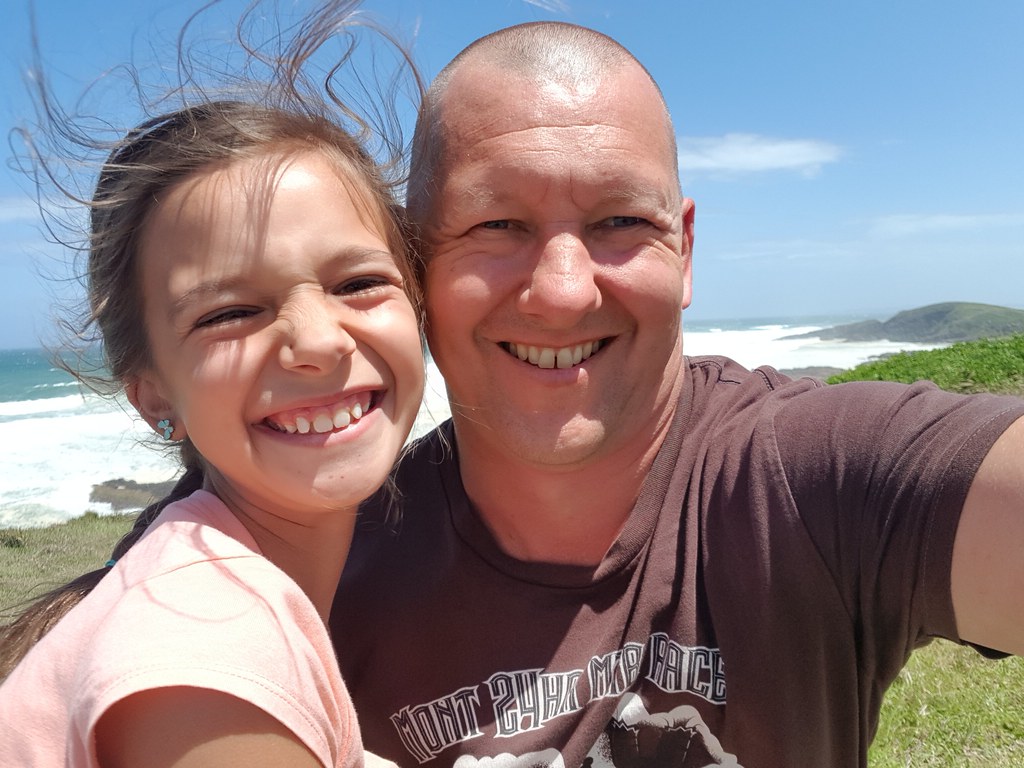 And hanging with my girl

The kids made some friends as usual, did a fair bit of riding and we did some walks and exploring, trying not to get blown away. Of course, we made a couple of trips into Crescent Head for pies too, and also had some morning tea with my Aunty who was there.

The campground here is quite nice. You’re never far from the beach, and in most situations, there’s some great waves off the point. There’s flushing toilets and (cold) showers. 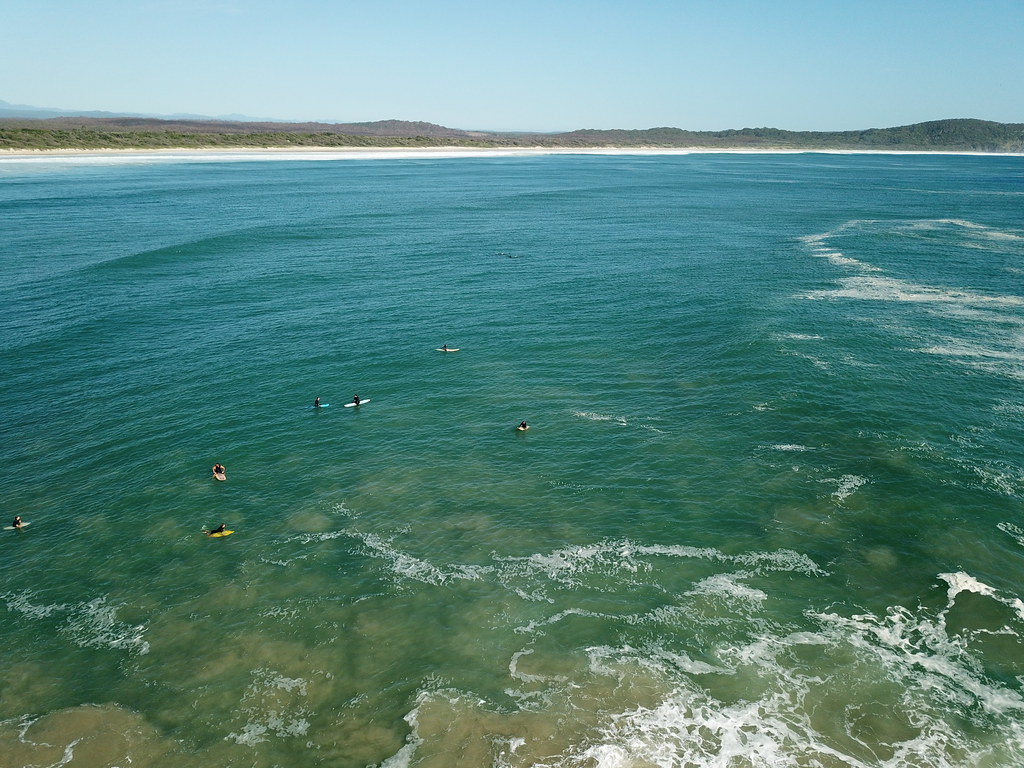 Some surfers enjoying the waves on our last morning there. Can you spot the dolphins?

The wind finally died down on our last morning here as we were packing up to go home. We were heading back to Lake Cathie to drop the kids off there before Rach and I had to come back to Sydney to work the following week. We had a great fun summer holiday, and are already looking forward to our next adventure – wherever that might be!