When making our plans to visit Stradbroke Island during the year, the subject of Christmas camp up. It was our turn to spend it with my family, probably in Sydney. However my parents do a fair bit of traveling as well (being the ‘Grey Nomads’ that they are) and it was agreed that they would come up and meet us in QLD somewhere. We threw around a few ideas, and eventually decided to re-visit Neurum Creek, as we had been here before in 2011 on our Fraser Island Trip. 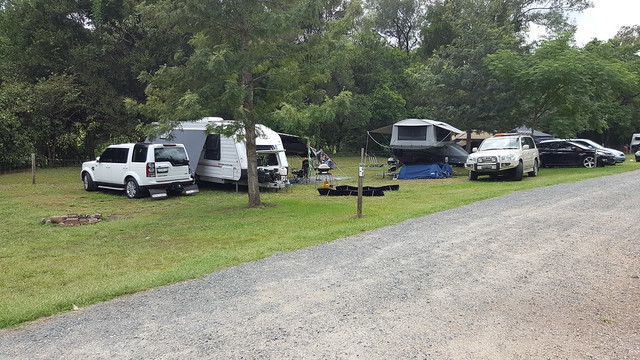 It was a fairly short drive from Noosa, even once we had stopped at the car wash to remove the sap that had been left covering everything! Just after lunch we found ourselves pulling in to be greeted by my parents who were already set up having stayed just up the road the previous night.

Next day the weather was beautiful, and fairly warm so we were expecting a warm Christmas. We headed into Kilcoy to pick up a couple of things, and also to empty our portable toilet as this was the nearest dump point. An hour in the airconditioned comfort of the car was a fairly welcome relief from the heat!

Christmas Eve was overcast in the morning so I took the opportunity to have a bit of a ride around the local area. There were some hills around the back of the campsite that I had a crack at, but they only reminded me how UNfit I am currently! Some motivation there for the new year! I made my way off the hills and then for an easy ride into the nearby D’Aguilar National Park which is a really beautiful and picturesque place. 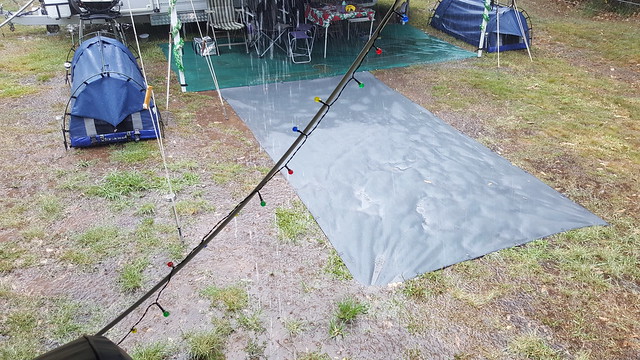 The rain was significant, you can’t quite see the shoes floating!

Shortly after lunch the skies turned dark and not long after the rain came! This was a good thing on the one hand, as we were wanting some rain to wash all of the sap off the canvas from Noosa. It was also fortuitous that the rain came while the kids were with Gran and Pa, and Rach and I were “marooned” alone at our camper. So they did some craft with Gran while we relaxed and watched the water cascading through the campsite. As the deluge subsided Pa grabbed a shovel and dug some trenches as their mat at the door was floating about 10cm above sea level and nearby shoes were starting to head downstream! 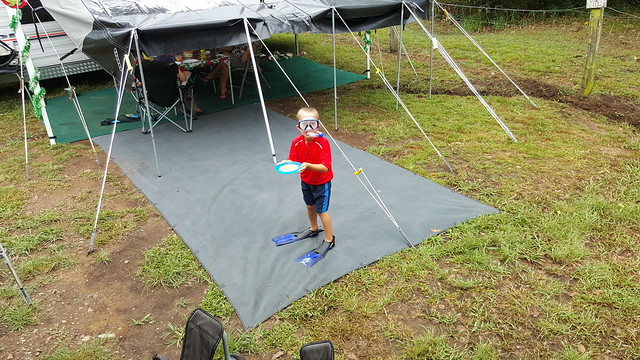 By 3pm the rain had just cleared in time for Santa to arrive courtesy of the Woodford fire brigade which was a real treat for the kids. He gave them all presents – Neurum Creek stubby coolers, full of lollies. Only in QLD would kids be given coolers by Santa! (OK, maybe also in ‘the territory’) 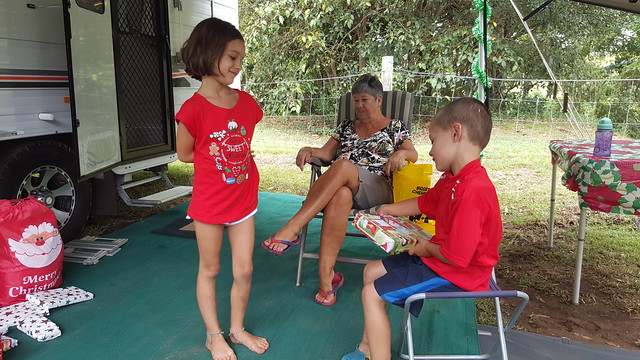 Early to bed for the kids, no knowing that Santa would know how to find them, was followed by a 4:30am wake up on Christmas Morning. Yes, this no daylight savings business is killing us! Ongoing showers didn’t dampen our Christmas day however, as we enjoyed a very tasty roast pork with veges for lunch, followed by a thunderstorm and dessert! Needless to say, we were all in bed early! 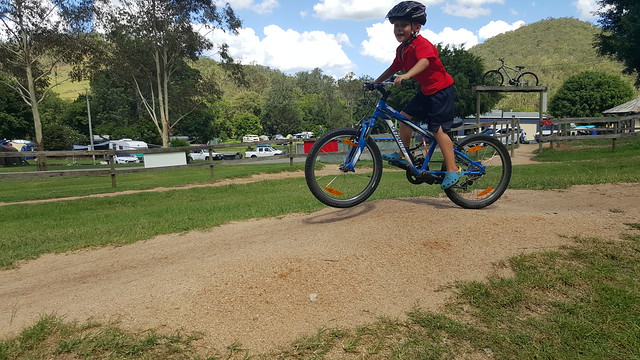 Boxing day I took Rach for a ride, followed by Lucas who nearly did the same distance (and probably without quite so much complaining!). There was also a small BMX track here for the kids that Lucas and Ella had a great time riding around. Lucas would have spent the whole day there, given the chance. We had a good time chasing each other around the track. The rain had eased by now, so we spent some time relaxing in the afternoon. Rach and the kids played some cards under the big oak tree while I updated the blog for our Noosa stay. 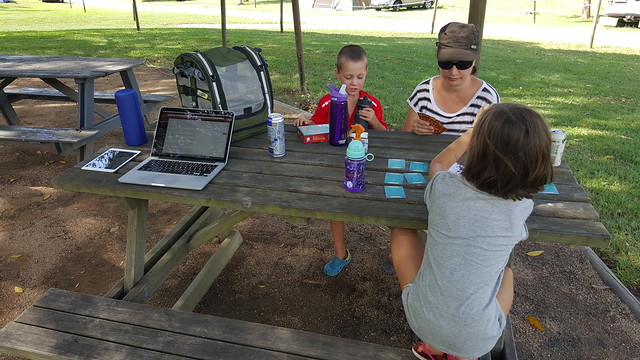 Chilling under the Oak Tree

The following day we were leaving, and packed up under light rain which kept us a little bit cool as the humidity was quite high. Before long we were following Mum and Dad up the road to our next stop.