DaveApril 1, 2018April 1, 2018 Trips No Comments
29 December 2017 – 2 January 2018
As our regular readers will know (thanks – both of you), we have a regular New Year tradition with Dave and Kate and their family, and now that they were campers again (yay!) we made plans to meet them at Knorrit Flat Riverside Retreat for 4 nights over this time. 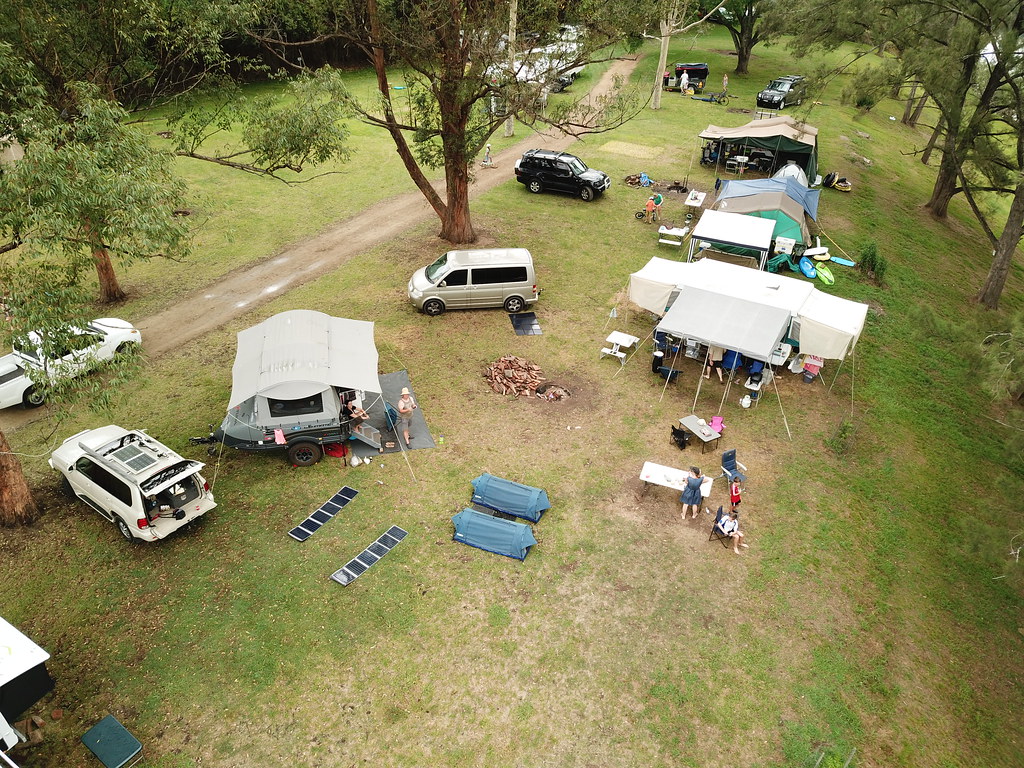 All set up with quite a bit of space

We had a fairly short trip in from Lake Cathie (via Wingham to pick up some supplies) and arrived shortly after lunch. It was stinking hot and Rach took the kids for a swim down at the river while I got most of the campsite set up. The sites were quite large so we were able to arrange ourselves and leave plenty of room for the Jayswan with optimum positioning. Our buddies arrived later in the afternoon, and set up mostly without a hitch. A small tanty was had when it was discovered that the fridge had managed to open itself during transit, but a short time and some amber fluid later, everything was under control. 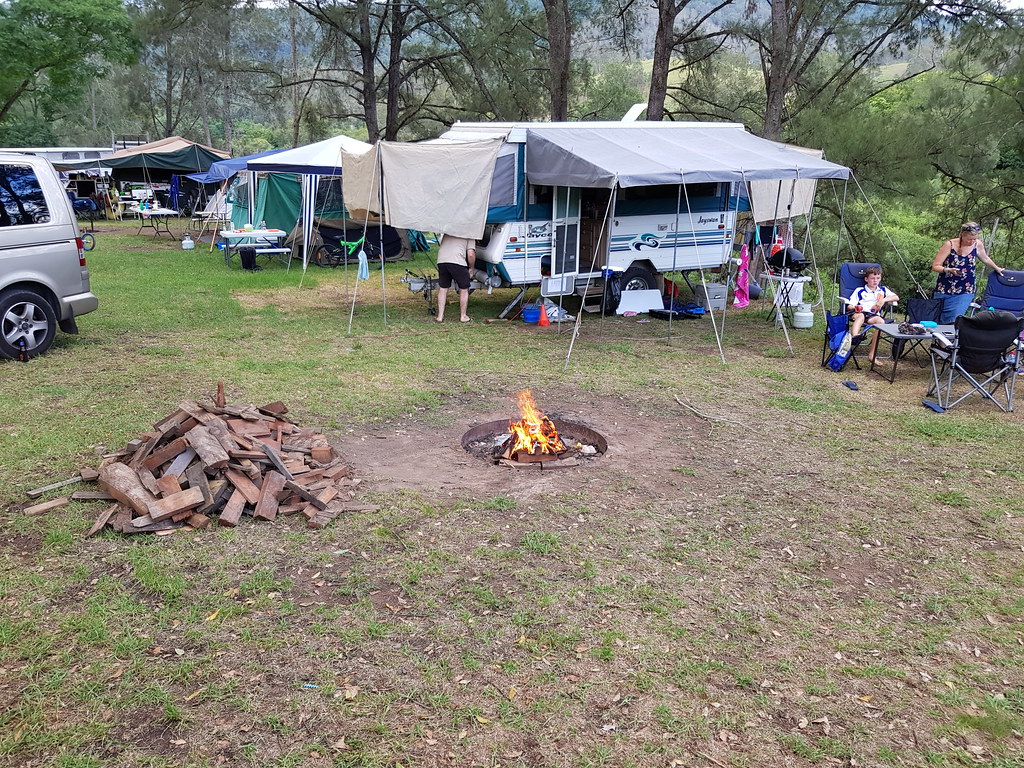 A good fire fixes everything

Lucas celebrated his 8th Birthday here. He doesn’t have a great date for a birthday, but always gets to celebrate in different locations. We even managed to have a cake (packet bought when picking up those essential supplies). 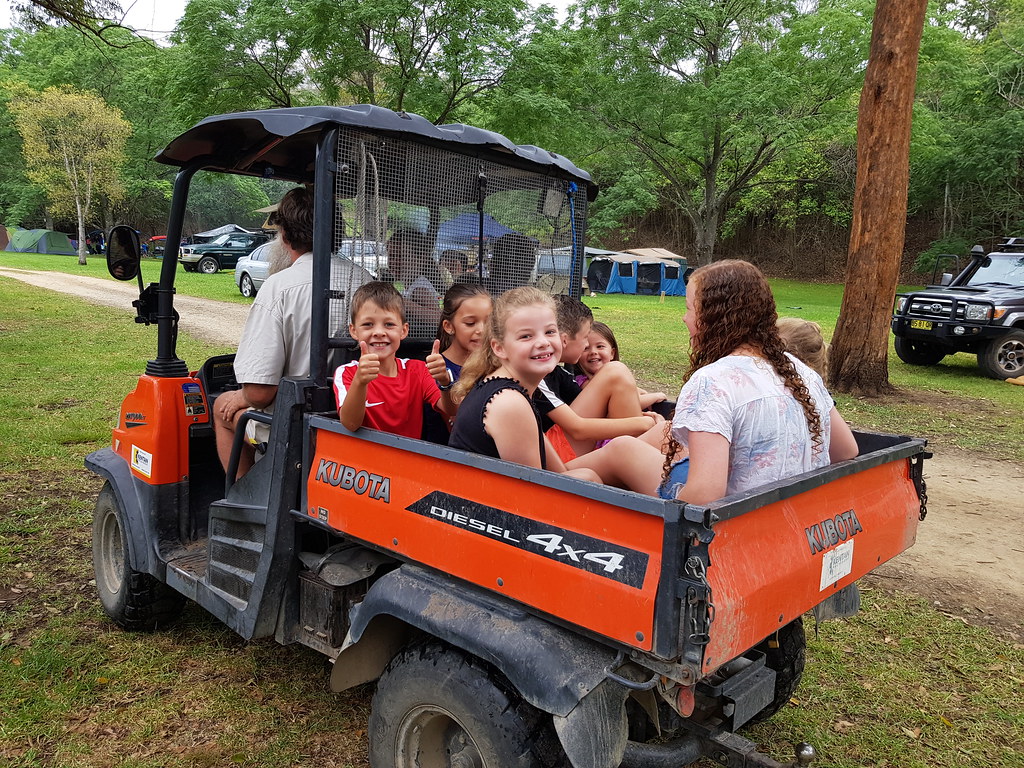 The next couple of days were quite overcast with a few showers rolling through. There were a few trips to the river for swimming, and lots of general hanging around, games, camp fires – all the usual fun stuff. Unfortunately the overcast (but still warm) weather took its toll on our solar charging ability, and so the V8 generator was called into action a couple of times to keep the batteries topped up. It seemed that “ol’ mate” next door was also having some charging issues, and chose to use a traditional generator to top them up… at about 5pm each day for a couple of hours, right at dinner time. Tops. 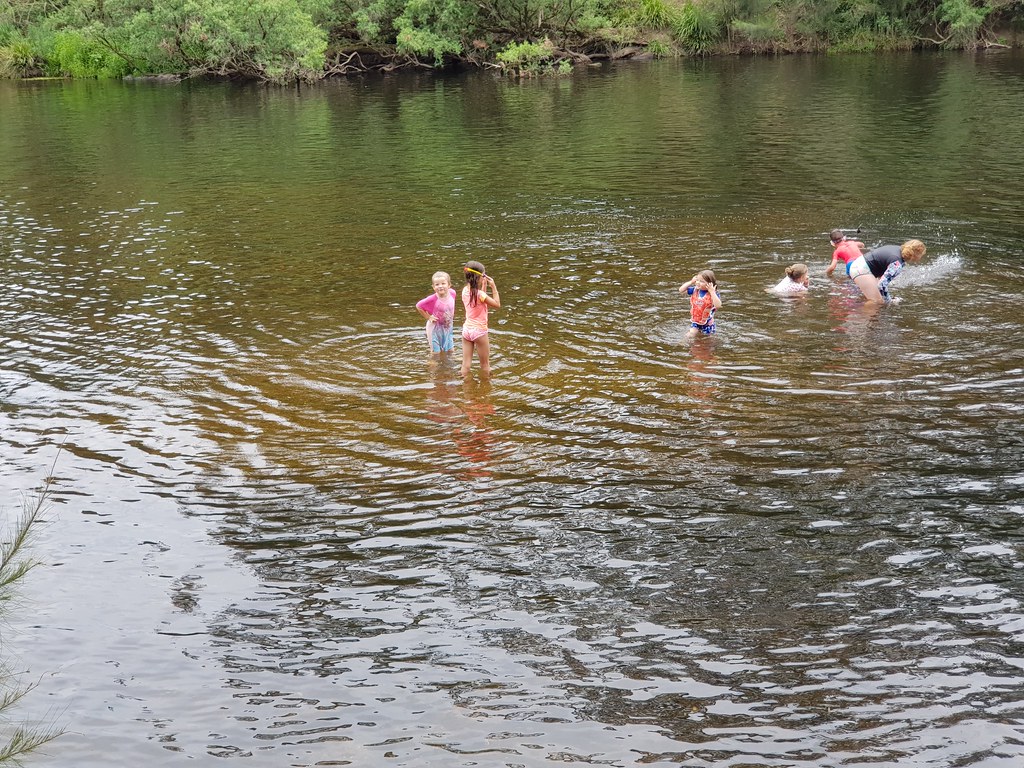 Plenty of time swimming in the river

In fact that kind of summed up our experience here, lots of people, and lots of noise. It was a beautiful setting, but we couldn’t help but wish for an experience more like Cundle Flat. Unfortunately, it would have cost Dave and Kate about double to stay there with their 5 kids – they are just too expensive. 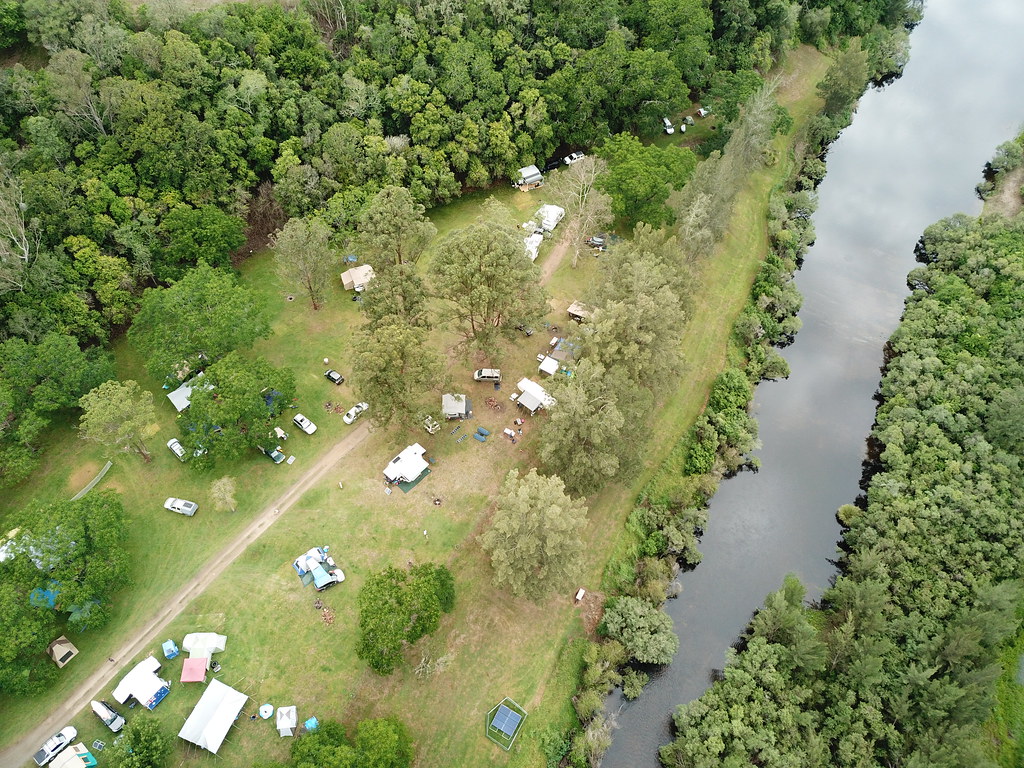 So nice beside the river

New Years Eve there was a fantastic fireworks display on the neighbouring property about 1km away. We all trudged up the hill and kicked off the celebrations at 9pm (after our magnificent roast pork). The next couple of hours until 12 seemed to take forever until the clock finally ticked over and we all went to bed… to enjoy the sweet sounds of those around us continuing to celebrate. 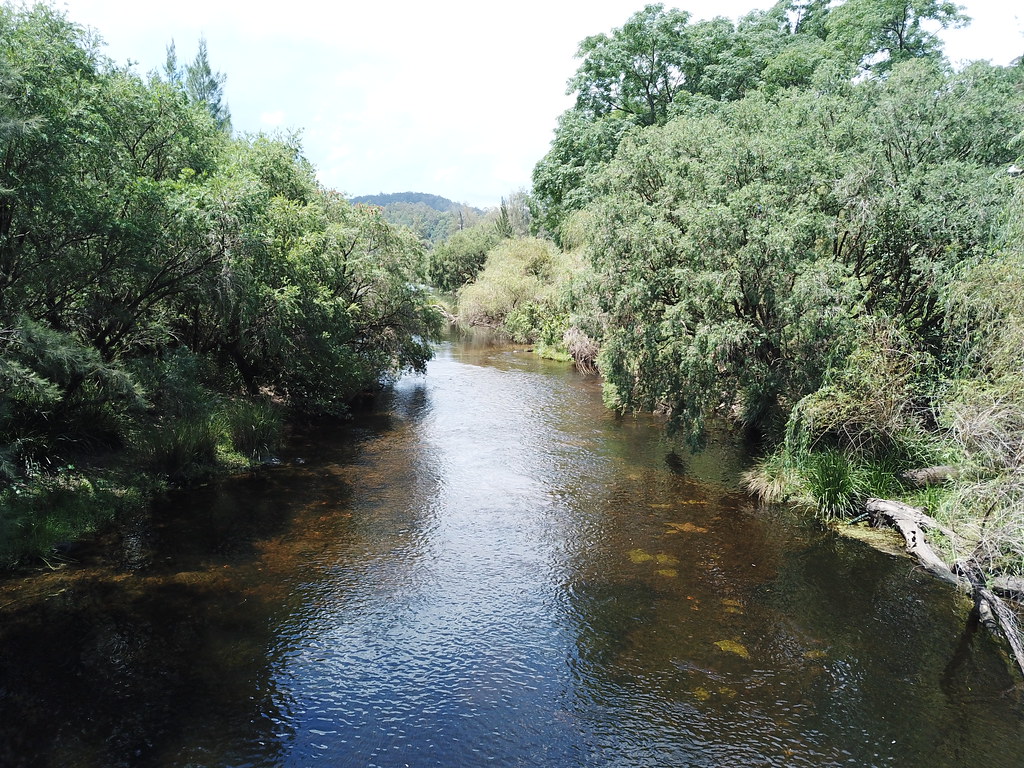 Finally some sun greeted us in the morning – perfect to join the trip up the river on inner tubes and then float down. The first trip it was just me and the kids – heaps of fun and nice gentle rapids meant that the 5 bigger kids could go by themselves for the afternoon trip. I think I held them up by floating too slowly on the first trip, but Millie was kind enough to hang back with me – they had no such anchor the second trip! 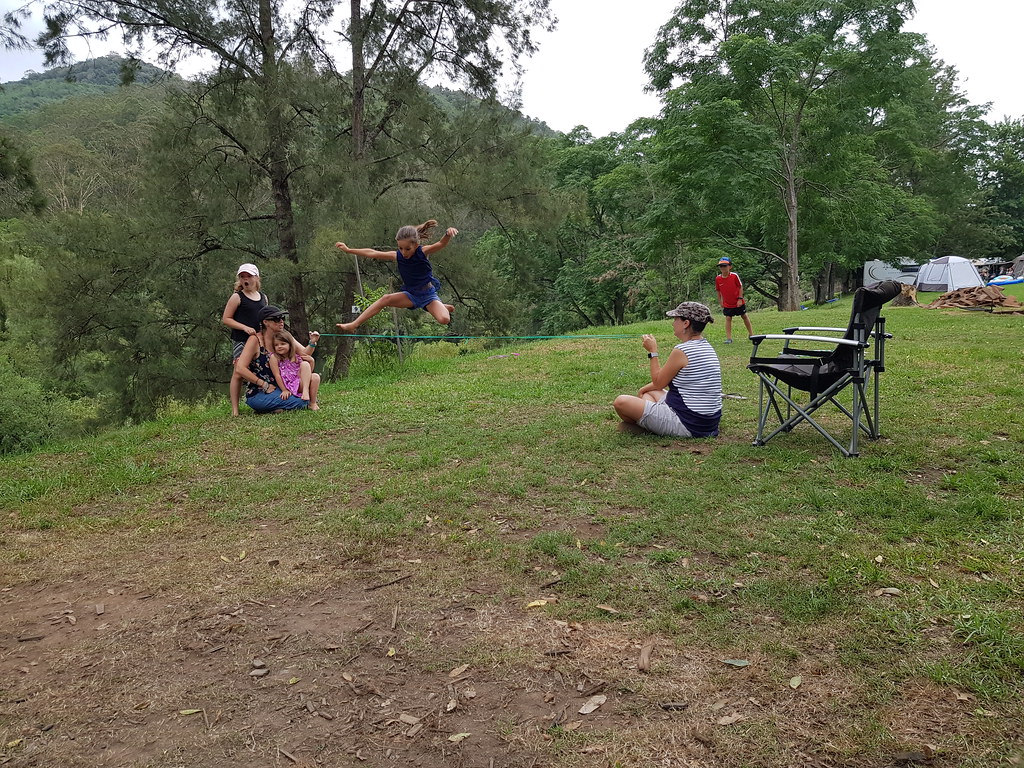 All too soon it was time to say our good-byes and be on our way. We had a reasonably big day ahead of us, going back to Lake Cathie to pick up the kids bikes, and then on to our favourite spot just outside of Coffs Harbour, so got moving fairly early. Thanks again to Dave, Kate and all the kids for a fun time, can’t wait until next time.
Score
Nights here: 4
Total nights: 173
Trip distance: 149km
Total distance: 18989km
1546 Total Views 1 Views Today
camper trailer, camping, family, friends, knorrit flat, new years, river, ultimate camper trailer