Let’s start with the awesome video from Chris, then there’s the story below!

SO the 2014 Mont was cancelled! Vans hired, food and beer packed and leave passes were issues by the wives. So not to waste an offer like that we headed north and took in some of the very wet but sensational trails of Awaba, Glenrock and Ourimbah.

The Mont is a 24 hour teams mountain bike race, that has been a must do on the calendar for the last 5 years. In 2013 I’d been preparing for my trip to South Africa to do the Sani2c, and was in pretty good shape. However this year time on the bike has taken a back seat to life, so I was looking forward to spending a weekend on the single track, although at a lesser pace to last year.

I was also excited to get away and see how the new tow vehicle – Stan the Tan Lexus – would go with the camper behind. Thursday evening the weather forecast was for rain, but looked as though it would be ok. I picked up Grant at about 6 on Friday morning and we made our way through the early morning rain onto the Hume highway heading south.

The rain was constant, but never too heavy. Our optimism remained even when we received the text message when we were about 30 minutes away from Kowen Forest, that the campground was closed due to rain. When we arrived it became quickly obvious that things were not good. There was water everywhere. Our regular campsite on the top of the hill even had about 10mm of water just sitting on top. 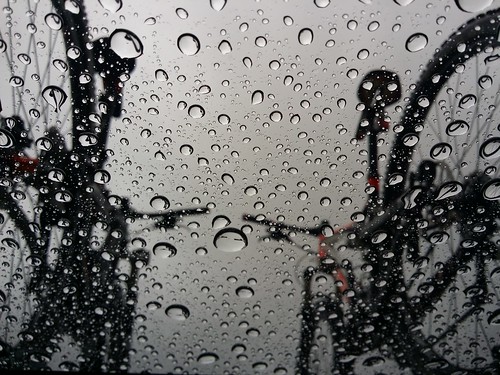 We sat in the car for probably close to two hours, watching people come and go, just waiting for news on what to do next, all the while keeping our team mates in the loop. Close to 11am the news filtered through that the Mont had been cancelled. It was hardly surprising given the amount of rain they had received.

It took us a while to process the news, and decide that there wasn’t going to be any good riding anywhere near Canberra, so around we turned and headed back towards Sydney, while Grant was on the phone to the rest of the team negotiating alternative plans for the weekend.

Unfortunately the low pressure system hanging over the south coast meant that the best chance for dry weather was going to be north of Sydney. The call was made to camp near Toukley at the Canton Beach Holiday Park, and to ride north of Sydney on Saturday. 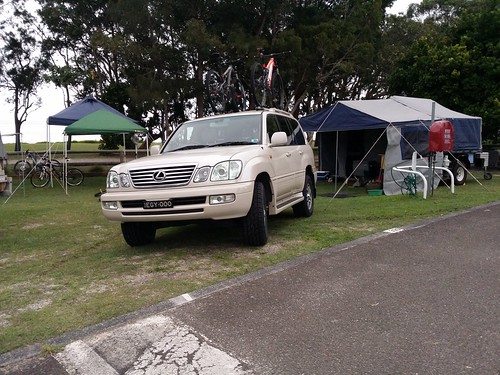 Setup in a great spot right on the lakefront.

Fortunately, Stan the Lexus is a pretty comfortable place to be as we made the trek back to the Central Coast to arrive late in the afternoon and then rush a setup as the weather looked to be closing in. It rained a little more that night, but Saturday morning was clear and we decided to ride Awaba in the morning and Glenrock in the afternoon.

We had a group of close to 10 riders in the end and had a great time riding together and chatting, which is something that we wouldn’t have had the opportunity to do if the we were racing. Awaba and Glenrock were both great tracks, with a few more technical elements than the Mont, along with some more climbing. After not riding so much over the past few months, I was relegated to the back of the pack and spent more time enjoying the scenery than most of the others! 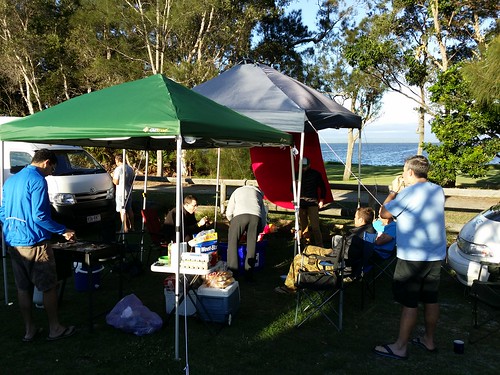 As always, there was more than enough food to go around!

We returned to camp Saturday evening for our traditional Mont Spag Bol dinner and a few beers before enjoying a full night’s sleep – again something we would have missed out on if racing!

On Sunday morning we were fortunate to pack up camp just in time before some showers came across the campground, and we headed back to Sydney, while some of the others headed to Ourimbah to get soaked half way through a lap. 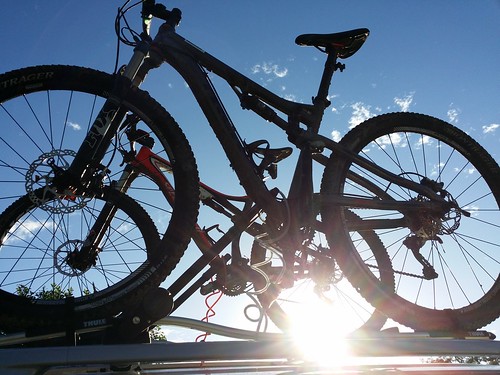 There was some fine weather in the end…

While not the Mont experience we had hoped for, it was a great weekend anyway. As a shakedown trip for Stan, it was fantastic – he towed the camper with ease, was supremely comfortable, and only used marginally more fuel than the old Prado did!