Rach and I had always wanted to get away together, just us with no kids, in the camper. So with the new Ultimate Xterra in the garage, just begging to be used, we decided to make it happen. We made arrangements for the kids to stay with my parents for the weekend (Ella also enjoyed a sleepover at a friend’s house for Friday night) and at 3:30pm on Friday afternoon, we were out the gate, with the camper in tow.

James Estate Winery is in the Upper Hunter Valley, not far from Denman and has some great wines. Not only do they have wines, but you can camp at the winery, with close access to their 10+ km of mountain biking trails that are carved into the hill behind the winery. Awesome! 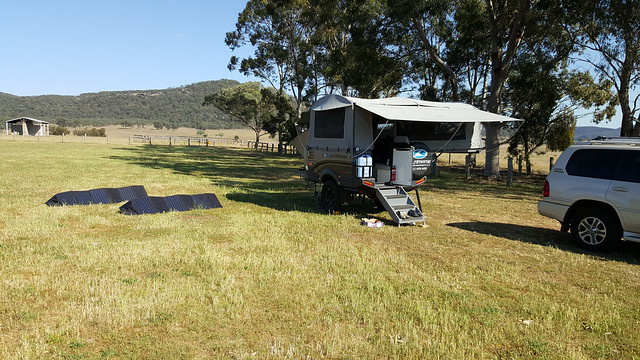 Awesome campsite, all to ourselves

We stopped for a bite to eat in Singleton – well I ate, the gluten free options were few and far between for Rach. When she asked for the chicken salad the response was “oh no, we don’t have the salad… ” – I wonder if they ever do! Eventually continued through a storm of bugs before arriving and setting up well after dark. If was a beautiful warm evening, so once set up all of the windows were opened so we could enjoy both the fresh air, and the view of the hills surrounding.

Saturday morning was beautiful, and we decided to get on the bikes fairly early as the forecast was for some pretty high temperatures. We really enjoyed the trails, easy enough for Rach to ride nearly all of it, but with enough interest for more advanced riders. By the time we’d ridden, and then showered after the ride, we were starting to get a little peckish and thought about lunch. 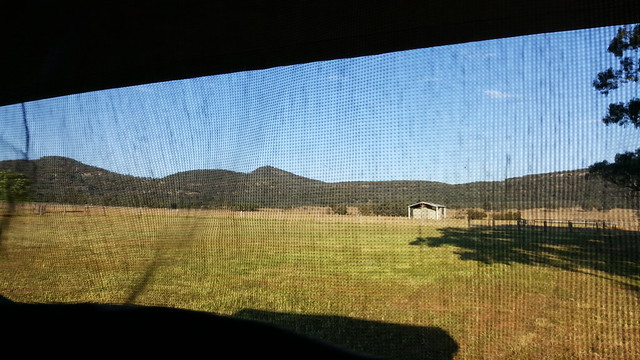 This wasn’t bad to wake up to

At this point Rach had the brilliant idea to go down and do some quick tasting and buy a bottle of wine to have with lunch. So off we went to the cellar door and met Graeme – the man behind the winery and indeed the mountain biking trails, and Sharna, who looks after many of the logistics of the winery. I’d also been talking to Sharna about bringing a group of students up for a mountain biking camp in 2016, so had some details to chat about. The ‘quick tasting’ was fantastic as Sharna took us through the range of wines, and 2 hours later we returned to our campsite with a couple of bottles, but not really needing to drink much more! We opened the chilled bottle of Rose anyway to enjoy with some (now) late lunch!

The rest of the afternoon was very relaxing as we sat around in the shade. An early dinner and off to bed, only to be woken in the middle of the night by a spectacular thunderstorm. Again we’d left all of the windows down, and we could see a fairly significant storm circling around us, but never really hitting us – for which we were thankful. 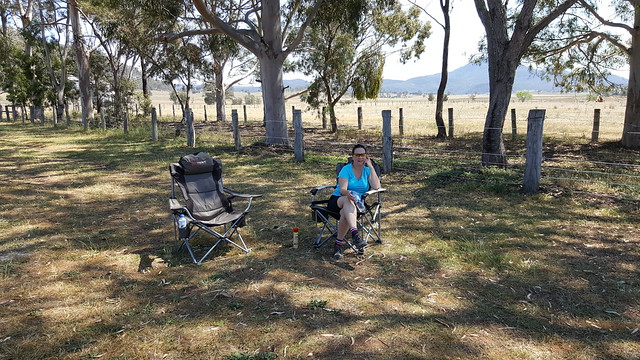 Relaxing after a ride

A few showers passed overnight, and the morning was much cooler than the previous day. Some bacon and eggs on the Weber for breakfast before another ride to make the most of the trails. Rach went back after a short lap, and I did another full lap before heading back to pack up. The skies started to look a little threatening, and, with dry canvas, the call was made to pack up pretty quickly. And quick it was… have I mentioned how much we’re enjoying being able to pack up quickly and easily? 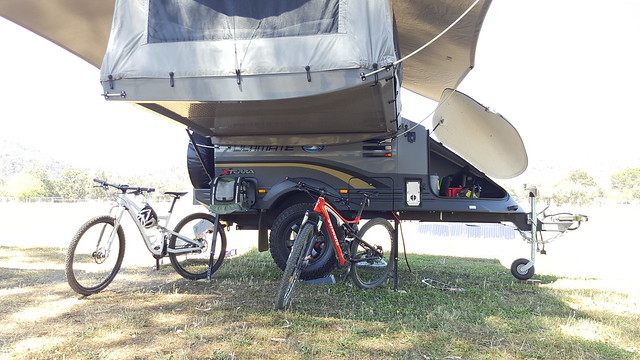 The trails at James Estate are fantastic

We enjoyed lunch at the Denman pub on the way home before enjoying a quiet drive home. It was great to get away for a quiet weekend and do some riding. Thanks to my Mum and Dad for looking after the kids for the weekend. We should do this again soon!